Coins of the German Empire

Coins of the German Empire attract many collectors. It is more correct to say that collecting German ancient coins is a separate branch in numismatics. In narrow circles, such a period is called Kaiser Germany. It covers 1871-1918. More about it, as well as the most famous gold coins of this era, we will talk below.

A bit of history

The German Empire began issuing coins after the Franco-Prussian War of 1870-1871 and ceased during the First World War. The corresponding law was issued on December 4, 1871 by Kaiser Wilhelm the First. The document contained information about the composition, appearance, as well as the weight of new coins. A separate part of it was devoted to the appearance of banknotes.

According to her, on one side of the product was to be the coat of arms of the German Empire, as well as the face value and year of minting. On the other was to be an image of the local ruler of one of the German states that entered the new empire, or the coat of arms of free city-states that were also annexed to the German Empire. In addition, on the front side there should have been an inscription characterizing the image, as well as a mint sign. 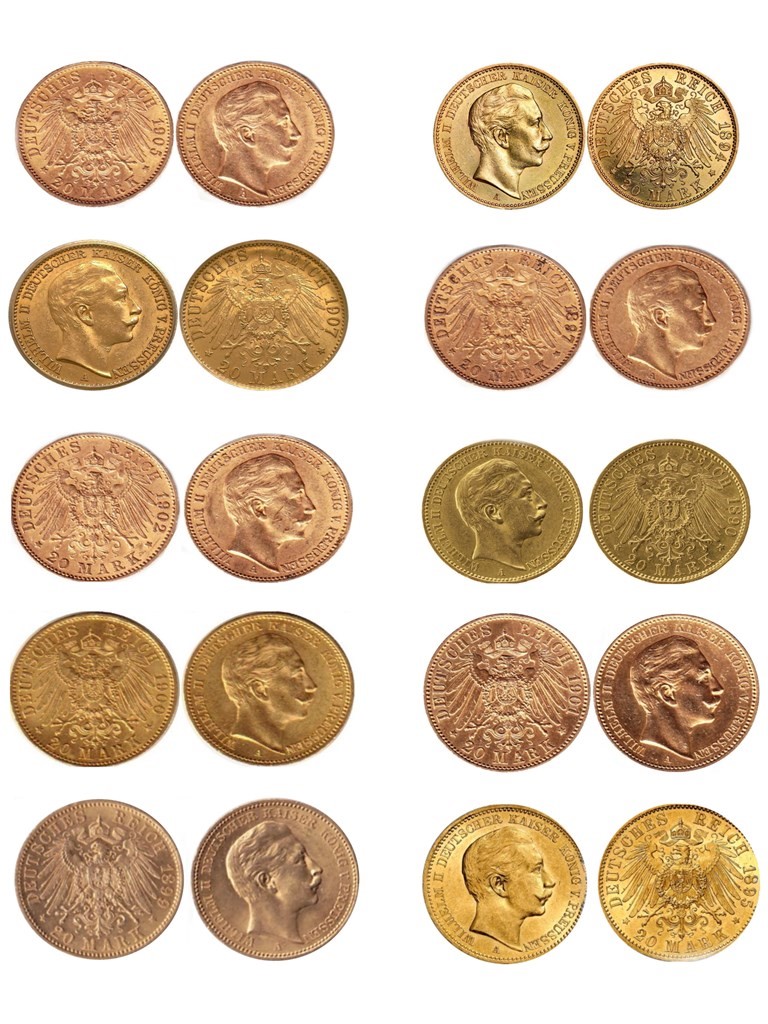 Gold coins of the German Empire

Consider coins of the described period using the example of those issued with a face value of 20 marks. For the first time such a cash sign was issued in 1871. It had a typical composition and other characteristics that are characteristic of all coins of the German Empire of that time, namely: 900 samples of gold, 22.5 mm in diameter and 7.965 grams of pure weight. The portrait of William the First, turned to the right, was presented in the central part of the obverse and partially surrounded by the inscription WILHELM DEUTSCHER KAISER KÖNIG V. PREUSSEN. At the bottom of the portrait is the mint sign: A, B or C, depending on the mint of Berlin, Hanover or Frankfurt.

The imperial eagle of the German Empire took its place on the reverse. Next to it is an inscription about the name of the state - Deutsches Reich, an oak branch, the face value of the coin and the year of issue. Subsequently, in 1874, the reverse was changed. On it was placed a reduced version of the imperial eagle and an inscription about the face value, presented as 20 MARK. The oak branch available in the first version was removed. On the slope of both issues is the inscription GOTT MIT UNS ("God is with us"). In total, from 1871 to 1873, 30.9 million coins were published. 2491 of them were presented as "proof." From 1874 to 1888, 26.3 million appeared, excluding banknotes issued as "proof" (since there was no evidence of them).

Coins of the time of Frederick the Third

Frederick the Third was the only son of William the First. His portrait, facing to the right, appeared on the obverse surrounded by the inscription FRIEDRICH DEUTSCHER KAISER KÖNIG V. PREUSSEN and the mint sign A. The drawing on the reverse of this cash sign coincided with the drawing on the second coin of William the First's time. This monarch's reign lasted just over three months. During this time, 5.3 million coins saw the light.

Major issues from the time of William the Second

The German Empire continued its existence with the son of Frederick the Third, William the Second. In 1888, a coin with his portrait was published. Her face value was 20 marks. Around the portrait there was an inscription: WILHELM II DEUTSCHER KAISER KÖNIG V. PREUSSEN, and a mint sign was also placed - A. The first issue of the gold coin was minted from 1888 to 1889. Its circulation amounted to 11.6 million. The second issue was released in 1890 with minor reverse changes. The heraldic eagle became larger, and the shield on his chest decreased in size. The second issue was published every year, from 1890 to 1913. During this time, 152 million copies were issued, 411 of which as a "proof."

Another gold coin with a face value of 20 marks was issued in 1913 and was issued until 1915. On her obverse was a portrait of the king, turned to the right. The monarch himself was captured in military uniform. Around it was placed the inscription WILHELM II DEUTSCHER KAISER KÖNIG VON PREUSSEN. Under the portrait was the sign of Mint A. There were no changes in the reverse, composition and other characteristics. The approximate circulation amounted to 3.4 million.

The German empire presented the world with many coins, many of which have survived to this day. Buying them is a profitable investment of money for a long time. The exact value of the money mark is determined by several factors, including weight, metal sample, historical value, safety, etc.